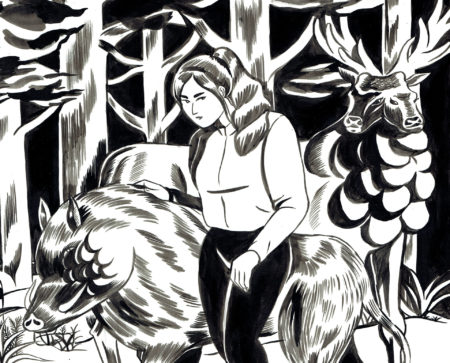 Born in Nantes in 1988, Elizabeth Holleville graduated from the Ecole Estienne (DMA in illustration) and earned a Masters in Comics Art at Angoulême. Immediately after finishing school she contributed to various fanzines including Biscoto and La Corde rouge (The Red Rope).

In 2018 Glénat published her story L’été fantôme (The Ghost Summer). Raised on genre TV series and horror movies, she has developed a strong taste for fantastic stories. She has used this predilection to work real life phenomena into paranormal situations. Among her influences: Charles Burns, Ludovic Debeurme, Daniel Clowes, Alison Bechdel, Jaime Hernandez, and Frederic Peeters.

Her second album, Immonde! (Foul!) was published by Glénat in January 2022 and confirms her taste for the supernatural as she developed a horrific bestiary for the story. There is also an unexpected contrast between the delicate midcentury-styled drawings of her characters and the clinical treatment of the cruel monsters that appear throughout the story.

Elizabeth Holleville now lives in Marseilles and is at work on her third comics album.

The original comic art of Elizabeth Holleville is published in L’ete fantome, and Filthy! (Immonde!).